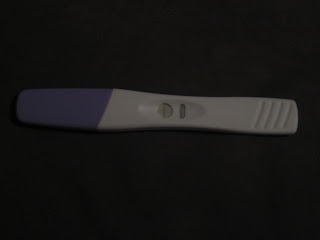 We are officially expecting! We found out on the 20th of November. I woke up early in the morning around 4 am and got down on my knees asking God if I was pregnant after being three days late. The last time I felt in my spirit a similar "yes" was when I sought the Lord if Wes was going to be my husband before we even start dating. After Wes awoke I told him that I had to go to Target to pick somethings up and if he would mind if I purchased a pregnancy test too. I anxiously arrived at target around 1030am. When I walked in the store every woman was either pregnant or had a baby in their cart. I thought to myself "Lord are you messing with me"? After purchasing all I had to get along with my home pregnancy test, I could not wait until I arrived at home to take it. So I took the test in the bathroom at the store. After about 10 seconds it read positive. I rushed home to tell Wes the news around 11am. It seemed like the longest car ride EVER. When I walked in the house Wes asked if I needed help with carrying anything. I said "YES" as I walked up stairs with the positive pregnancy test in my hand. As he turned around I told him we were pregnant and showed him the test. He asked if it was safe to touch the test. He eventually did and we then embraced as we also got choked up together.
Posted by Jonnique at 4:46 PM

Such a cute story. You are going to be a wonderful mother, what a lucky baby! Great seeing you at the wedding. Congrats again!

I loved the story. You capture everything with your words. I hope the Doctor is right! And if he is not, that would be perfectly OK.

Jonnique
L is for Love and I love to blog! On this blog you will read and see my love for taking lots of pictures, crafting, new recipes, fashion, my family, and Christ! I am married to one of my Best Friends that I met in college. He is the biggest blessing in my life. I am a Mommy to two Miracles ,a Lil Warrior and a Tiny Princess 7 days a week. I also work as a R.N. 2-3 nights a week. I believe blogging will help me not take my life for granted and provide a great outlet! Your invited to enjoy the life God has given me and how I see it!